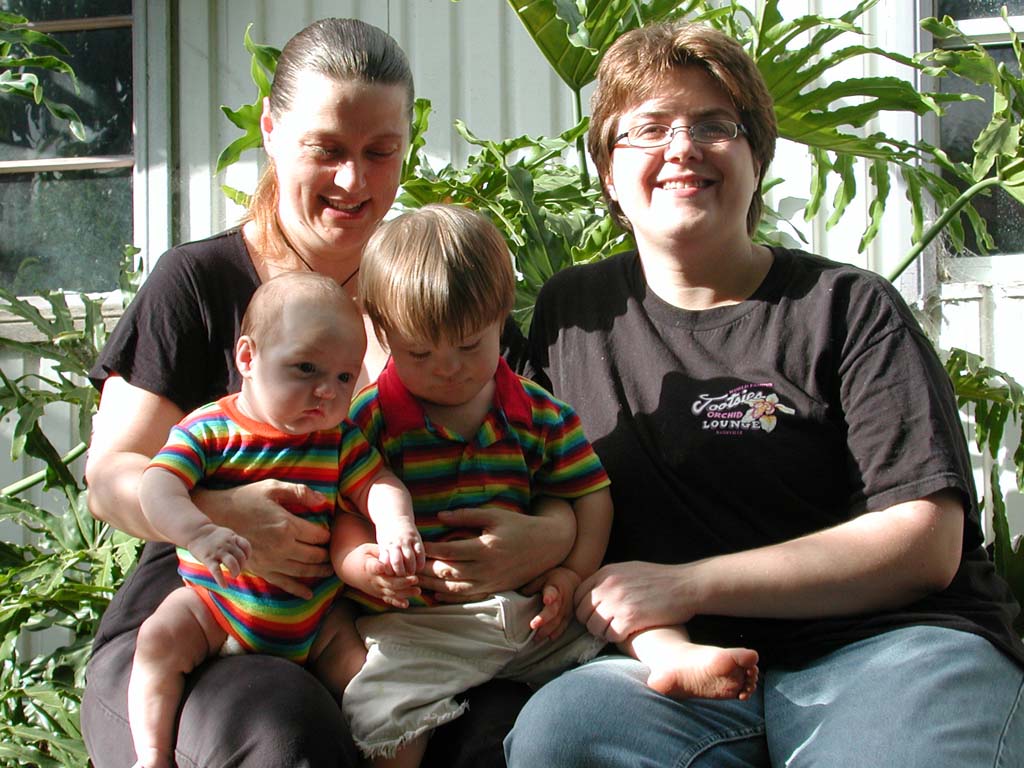 Social science has gained higher profile than usual in recent years as it has been called on to testify in courts of law and in the court of public opinion about same-sex parenting. Do the children of same-sex parents do any better or worse than children of opposite-sex parents? That is what lawmakers and judges have eagerly wanted to know.

The response from social scientists, with notable exceptions, has been unequivocal: there is ‘no difference’. This, they say, is the ‘scientific consensus’, from which it would be irrational, ‘delusional’ even, to demur.

They claim that children raised by same-sex parents do not show any differences at all compared to those raised by male-female parents – not in sexual orientation, sexual behaviour, gender identity, personal values, drug use or mental health.

Neither are same-sex unions said to be any less stable than male-female unions. As one 2006 paper put it: ‘Not a single study has found anything unstable about the families created by lesbian and gay parents.’

Walter Schumm is a social scientist who begs to differ. Reviewing hundreds of studies in his important new book Same-Sex Parenting Research: A Critical Assessment, the American professor of some 30 years finds plenty of evidence for differences of various kinds, and in the work of ‘liberal’ scholars not just ‘conservative’ ones.

Reviewing virtually all extant research in the area, he finds studies which show, for instance, that same-sex parents tend to take more progressive attitudes in areas like gender norms and sexual behaviour, as well as adopt an overall more permissive approach to parenting (p 100).

These differences as well as the parents’ own example are shown to have a marked impact on their children, making them, for example, less distinctively gendered than the children of male-female couples – sons more feminine, daughters more masculine. This is especially so in the case of lesbian parents (p 155). To illustrate permissive attitudes: in one 2011 study the children of lesbian mothers were found to be almost three times as likely to have used illegal drugs (p 172).

Schumm’s method is nothing complicated, just more thorough and comprehensive than those he is criticising. As Dr Paul Sullins observes in his review of Schumm’s book: ‘In response to an influential, politically correct review of the literature that concluded there were no differences for same-sex-parented children in gender-role behaviour (the tendency for boys to do masculine things, or for girls to do feminine things), Schumm notes that the author cited only thirteen papers; he then proceeds to cite nine more on the topic, including three by the author of the review, that contradict the review’s conclusion.’

Gay male parents on the other hand appear to have peculiarly stable relationships – but here we need to keep in mind that a large proportion of such stable gay relationships are open (that is, not sexually exclusive), and that this openness is often credited with aiding their stability (p 103). In addition, gay parents are typically of higher socio-economic status as they have been able to meet the added cost of acquiring children without a female in the relationship – a factor which aids stability.

It is in part the instability of lesbian parental relationships that makes studying them so difficult, as it can be very hard to find a random sample large enough to obtain statistically significant results. For example, a 2012 study by Mark Regnerus began with a population sample of nearly 3,000 people but within that found only three lesbian parent couples that had been stable since the birth of their adult child (p 72). Regnerus’s work was sharply criticised for this, but it is a problem common to many studies in this area, and Schumm suspects that the real driver of the intense criticism of Regnerus was an animus towards his findings (p 273).

Relationship stability is an area of crucial interest because it is known to have a strong effect on children in areas such as educational attainment and mental health. If same-sex parents have more unstable relationships then they are likely, if only for that reason, to produce worse outcomes for children.

One way that liberal social scientists have avoided this conclusion is by arguing that the negative outcomes must be regarded as the result of the relationship instability, treated as an independent variable, and not the sexual orientation of the parents.

In statistical terms, they do this by controlling for relationship instability, thereby showing that for children in stable same-sex families the differences with stable male-female families almost disappear (with other controls then being applied to eliminate remaining differences).

Now on one level this is fine – controlling for independent factors is a perfectly standard and respectable form of statistical analysis.

It becomes misleading, however, when it is used to support a claim that same-sex parenting makes no difference to child outcomes. For clearly if same-sex parents have inherently or typically more unstable relationships then they will produce statistically worse outcomes for children. Those worse outcomes do not disappear merely because the relatively few stable same-sex families are spared some of them, since it remains the case that the majority of same-sex parental relationships are relatively unstable.

Schumm explains that really researchers ought to be doing more to treat relationship instability as a mediating factor through which same-sex parenting impacts on child outcomes (p 86). He laments that so few researchers appear interested in or willing to do this.

The misleading use of statistical controls (whether done intentionally or unintentionally) is just one of the ways in which liberal social scientists have airbrushed away the differences between same-sex and male-female parents.

Another, Schumm explains, is through an over-focus on ‘statistical significance’ – essentially a measure of how likely a study is not to have thrown up a false positive or negative (usually a reflection of the sample size). By prioritising statistical significance over effect sizes (a measure of how much difference some factor has made in the study) scholars have been able to write off large swathes of valuable findings which show a large effect size but have not passed the researcher’s chosen threshold of significance. Often, Schumm notes, the effect size goes entirely unreported, no matter how large it is (p 292).

Yet the difficulty of obtaining large sample sizes in this area makes it a challenge for any study to pass such thresholds of significance. This makes it all too easy for scholars to dismiss inconvenient results which show clear differences but whose sample size puts them outside of an arbitrary significance threshold. This allows scholars to claim there is ‘no evidence of difference’, when really it is not evidence of absence they have found but absence of evidence, and then only because they have discounted the evidence that falls below an arbitrary threshold of significance.

A further factor is the universal tendency towards confirmation bias, which sees reviewers cherry-picking studies which fit their preferred narrative and showing a lack of curiosity to search out more which don’t. Taken together such considerations go a long way to explain how liberal social scientists (who make up the large majority) have managed to present a ‘consensus’ to the public when a considerable number of studies would tell otherwise.

Also deserving of mention is the much greater difficulty experienced by scholars who attempt to publish results which don’t conform to the approved narrative, and the disgraceful pressure placed on publishers and universities to retract heterodox articles and remove their authors from post. Schumm devotes an appendix (Appendix C) to recounting some of this appalling and anti-scientific behaviour, which he is concerned severely undermines the credibility of the discipline, changing it from science to activism.

A few other choice facts from Schumm’s book, which help to fill out our picture of same-sex parenting. Lesbians form the large majority of same-sex parents – a point largely explained by biology, it being much easier for women to bring children into the relationship. Biology also likely explains why only a small proportion of same-sex relationships have children – 8 per cent according to one 2017 study, 7 per cent lesbian, 1 per cent gay men (p 78) – though personal preferences and values may also play a role.

The majority of the children in same-sex families were originally born into a male-female family that subsequently broke down, the children remaining with one parent – 70 per cent according to one 2015 study (p87). This was especially true for lesbian families, and partly as a result lesbian parents tend to be of a lower income bracket than heterosexual parents (p 71). Gay male parents on the other hand, as noted earlier, tend to be of much higher income bracket owing to the additional costs gay men have to be able to meet in obtaining children. The difficulty of obtaining children also tends to make same-sex families smaller.

Same-sex parents also show an interesting gender bias towards children of their own sex, with one 2017 population study in the Netherlands finding around three quarters of the children of same-sex parents to be of the same gender as those parents (p 153).

All of this adds up to a picture of numerous differences between same-sex and male-female families. The ongoing attempts among social scientists to deny these differences and assert a consensus on ‘no difference’ constitutes nothing short of a crisis in social science, and in an area where scholars are currently widely involved in informing public policy.

Schumm relates how between the 1980s and 2000s social scientists could frequently be found proclaiming that the number of children being raised in same-sex families in the US was upwards of 14 million. This figure became standard in academic papers and official documents and was cited in support of numerous policy and judicial decisions. Yet in the last decade or so it has become increasingly clear that the true figure is closer to 200,000 – more than 25 times smaller. Schumm digs down into the origins of this spurious figure and its rise to prominence and finds a sorry tale of exaggerated, unsubstantiated claims gaining traction because they suited the favoured narrative of elites and academics (p 73).

Schumm implores his fellow scholars to learn the lessons of this embarrassing error and take much more seriously the biases that can skew their output. He calls for a return to more rigorous and objective social science that seeks truth rather than consensus and the professional ostracism of those who dare to disagree. Past experience suggests such a call may fall on deaf ears, but perhaps this time some people really will listen.