Official figures released this week show that England and Wales are now experiencing their lowest birth rates since records began 80 years ago.

The Daily Mail quotes Conservative Woman’s Kathy Gyngell saying it heralds a ‘long-term decline in numbers of babies’ and is a ‘social disaster’. She’s not wrong.

Birth rates have been in long term decline since the end of the post-war baby boom, plummeting as the contraception-fuelled 1960s sexual revolution got under way. They rallied a little in the 1980s boom years before returning to decline in the recession-hit 1990s. 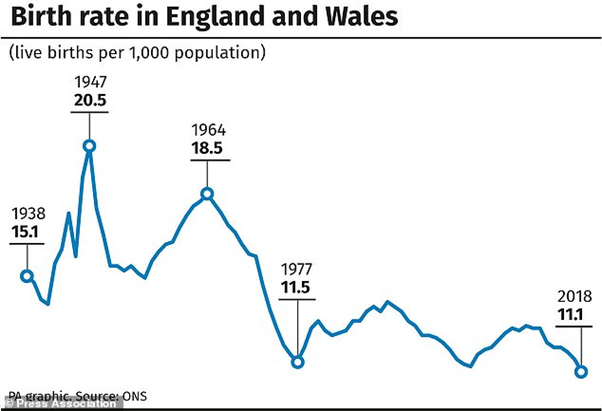 Mass immigration under the Blair government in the 2000s saw a surge in births among foreign-born parents. But even with such births holding steady today at around 28 per cent, overall rates in 2018 have dropped to their lowest level yet, just 11.1 live births per 1,000 population. This is down from a baby-boom high of 18.5 per 1,000 population.

The new low represents a fertility rate of around 1.7 children per woman – well below the replacement rate of 2.1. This means the home population of the UK (rates are similar in Scotland and Northern Ireland) is declining, and the current increase in the UK population of around 390,000 per year is entirely a result of net inward migration.

Modern economies with large welfare states rely on a stable or growing population to avert a ‘demographic crisis’ where the burden on the working-age population to support the older non-working population pushes tax rates to uncompetitive and unsustainable levels. This is one reason why immigration proponents regard high immigration as necessary when birth rates are low.

In the long term if birth rates do not pick up, or do so only among more recent immigrant groups, the result will be ever-increasing cultural and ethnic diversity in British cities and among the British population.

High levels of social and cultural diversity are known to reduce social cohesion and trust within a population and impede the process of integration of newcomers. They also make it more difficult to put a stop to harmful cultural practices and hostile attitudes among minority groups.

But economics and social considerations aside, the human race is designed to have children. Biologically, one of our strongest drives is connected to our reproductive capacity – our bodies and brains are constantly urging us to consider pairing up with the opposite sex. Psychologically, having children is central to humanity’s emotional well-being. One problem is that this is a drive that too many of our political leaders have rejected. An astonishing number in the West are childless themselves.

P D James’s novel Children of Men is set in a world where fertility has suddenly stopped and no more children are born. It quickly becomes clear that hope depends on future generations. James writes: ‘It was reasonable to struggle, to suffer, perhaps even to die, for a more just, a more compassionate society, but not in a world with no future where, all too soon, the very words “justice,” “compassion,” “society,” “struggle,” “evil,” would be unheard echoes on an empty air.’

To have children is to have hope for the future. To cease is to despair, to decide humanity is not worth it. It is not clear that our political masters understand this basic matter of theology and humanity.

On a personal level to have children is to have family, to give life to a new generation who will survive you and have children of their own. Grandparents, parents and children, brothers and sisters can turn to one another in times of celebration and times of crisis to share joys and challenges with one another, to laugh and to weep.

To lack family is to risk being alone. To have no children is to have no one to watch grow up, to be there for, to care for. To have only one child – better than none, to be sure – is to give a child no brother or sister to grow up with and learn life with.

Little wonder that loneliness – which has been linked to a 50 per cent increase in risk of mortality – is reaching epidemic levels in our society when so many are having so few children or none at all.

The gift of family is one which nature has especially entrusted to women to foster and enjoy. Can it be a coincidence that women’s reported happiness has declined along with the birth rate? Or that one in four UK young women suffers with a mental illness?

How have we arrived at this desperate and nihilistic state of affairs? One of the main reasons for the decline in births is the decision of women (or the decision taken for women) to prioritise their careers. Sex and the City author Candace Bushnell has recently spoken of her regret at choosing her career over children, saying that at 60 she was now ‘truly alone’. ‘I do see that people with children have an anchor in a way that people who have no kids don’t,’ she said.

At a time when many, like Harry and Meghan, think that having fewer children or no children is the best way to save the planet, it is worth reflecting on what we are saving it for. Are we saving it for pandas or people? Do we want our culture to survive in the long term? Assuming we do, we need to show up to conserve and defend it – some things can’t be left to others – and most fundamental is reproducing.

It’s true that some parts of the world may need to look at reducing their birth rate to combat poverty and child mortality. But the UK and Europe are not among them. Thinking we can make up for a lack of children through welcoming en masse the people of the world is to set a course for cultural fracturing, if not suicide. It is also to take away from other countries some of their best people instead of training our own.

If the government cares at all, it needs to kick this addiction to economic immigration and end its war against motherhood. Women are not merely units of economic productivity. Children are not just impediments to women’s careers. For far too long women’s role in the private and domestic sphere has been devalued and children’s need for maternal time underestimated. For far too long mothers at home have been treated as second-class citizens, and marriage – the crucial and critical support for parenthood – casually disregarded as having no special social value. For far too long governments have penalised married couples in the tax system, especially those with one earner.

For this birth decline societal death wish to be stopped three things need to happen:

One is a radical reform of marriage and family taxation that would advantage (instead of disadvantage) one-earner couples with children to make this possible at the very least in the pre-school years.

The second is to halt the State’s takeover of family and child care responsibilities, and restore the autonomy and independence of families.

The third is a cultural shift in attitude that starts to recognise the deep damage and disruption to family life and happiness bound up in reproduction that is caused by feminism. There is nothing shameful in choosing homemaking as an occupation; there is nothing wrong about having marriage and children as a prime goal in life; there is all to be proud of for a woman to prioritise or focus on her homemaking and nurturing role. It is what many women want – most mothers want more hours at home and fewer at work, and if they can they do. Nor is there anything demeaning about periods of financial dependency on a husband provider. That is what marriage is about: trust, love and commitment.

We are constantly told that we cannot use the tax and benefits system for social engineering. But governments have been doing just that for the last 40 years to push women back to work. It has worked a treat. Never have more women been in work or more mothers in full-time work. Female feminist politicians regard this as a triumph. They are not leaving any stone unturned until children cease to be an impediment to women’s progress in the labour market. They should be wary of what they wish for. Women are complying – often by having no babies at all.

One thought on “Without children, the future holds no hope”